In the early days of the Bektashi order, it was the tireless efforts and devotion of  Sari Saltuk and Seyit Ali Sultan who dedicated their lives to spreading the teachings of the Order across eastern Greece, Bulgaria and southern Romania. Due to their significant contribution and their success in converting people to the Bektashi faith, in the 15th century, The Balkans became the epicentre of the Bektashi Order. Hence, the architectural masterpieces seen in the Balkan’s today were Bektashi Congregation Centres during this era.  Interestingly, the Ottoman literature and poems were more prolific in this area than in Anatolia itself which in itself is quite amazing  (as discussed in Prof Dr Michael Kiel’s book on Haci Bektas Veli).

Islamic history documents state the attack on the family of 4th Caliph Ali, during which some of his family members including his grandson Zeynel Abidin, the son of Huseyin were abducted and taken to Turkmenistan saving their lives as well as the lives of many others. This was followed by the tragic event of Huseyin being decapitated by Yezid the son of then Governor of Damascus Muaviye.. Naturally, after taking shelter in Turkmenistan,  over time through intermarriages and assimilations with the local population, they too were Turkmenized.

This historic event marks the day of hope for Islam as it was believed that one day Zeynel Abidin would return as their saviour to uphold  the integrity of Ehlibeyt (generally referred to as ‘Fivers’) the family of Muhammad, his son in-law Ali and his family.  Even in modern times, Islam still awaits the coming of a Messiah - Zeynel Abidin.  While I do not believe in the return of the Messiah myself, the tolerance of Bektashis’ is further highlighted by the belief that”each era should create its own Messiah”.

“My cardiologist Dr Maurice Rosenbaum and I formed a special family bond. He kept talking about the Khazar tribes of Jewish origin, and I kept talking about the dervishes of Khorasan, another Caspian Turkmen tribe. One day, he had asked “have you ever heard of Shabatai Szevi who converted to Islam in early 1600 AD?”

Here is a summarized version of Dr Rosenbaum’s account on Shabatai Szevi:

In the mid 1600’s AD, Shabatai Szevi went to the Ottoman Sultan of the time and said ”In Islam you are waiting for the return of the Messiah, In Hebrew, we are also waiting for his return. Here I am, the one that both Islam and the Jews have been waiting for”. He proceeded to asking the Sultan to abdicate his Throne to him.

Shabatai Szevi’ was a Khazari Jewish Rabbi who won the hearts of many followers in the Balkans, Jerusalem, Cairo and northern Africa. Maurice’s account of Shabatai Szevi gave me sufficient ammunition to search and find out more information about him.

“Sabbatay Sevi (later known as Mehmet Aziz Efendi) a son of Mordehay Sevi, who was known by his nickname as Kara Mentes was a Jewish Rabbi, merchant, trader and appeared as a Messiah (Izmir 1626-Ulgun 1675).He became a Rabbi on his religious mother’s wish. A prominent Rabbi at Izmir Synagogue Issac Dalba taught him The Pentateuch, The Genesis, studied theology.

Studying these books, he had worked out that Christians believed the return of a Messiah in year 1666 and Jews believed in the year of 1648. Therefore, he declared himself as the Messiah in 1648. Despite denunciation by the then Izmir Chief Rabbi Joseph Eskopa, Jews already accepted him as Messiah. By this time, he had a very adventurous life style. On recommendation by Rabbi Abraham Vacini he move to Thessalonica in 1650 and than to Athens, thence to Istanbul and subsequently returned to Izmir (1659). Three years later, he had gone to Cairo from there moved to Jerusalem.

On his return to Izmir, he was throned in accordance with Jewish traditions. He visited the Izmir Moslem Judge with a large contingent. Dividing the Jewish world into 38 regional contingents, he issued a decree. To pay their respect, he accepted visitors from the Islands, Germany, and Poland.

He then became a target of the Ottoman Sultan who later interfered with his activity. Koprulu Fazil Ahmed Pasha ordered Shabatai Szevi’s  arrest, brought him to Istanbul hence imprisoned him (January 1666) at Zindankapisi prison. Shabatai Szevi was later sent into exile to Aydos.

On the order of the Ottoman Sultan Mehmed IV, he was sentenced into Adrianople Palace. However, following his acceptance to convert to the Bektashi Order he was thereafter known as Saint Mehmet.  (Mehmet Aziz Efendi). After conversion to the Bektashi Order he continued his missionary work. Later, he was sent into exile to Ulgun, Albania where he died. His followers continue to practice his teachings.

Translated by Veyis Haydardedeoğlu
Website Editor’s Note: When Shabatai Szevi was placed under house arrest (Adrianople Palace), he was introduced to Bektashi Dervishes in the Balkans then the infamous Balim Sultan. When Shabatai compared Bektashi Order to his own faith, he discovered that the Bektashi Order was an extension of his own faith but more constructive, logical and contemporary way of life based on logic and science. He had then converted Bektashi Order rather than the Islam based on Arabic interpretation.

Further link to get more information about Shabbatai Szevi. 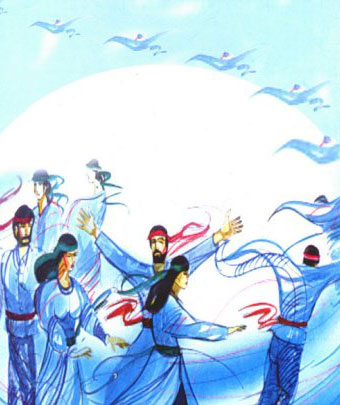